There are so called modern yurts, which are produced mainly by companies in the U.S. The modern yurts take the concept of yurt structure from Mongolian yurts. But they are very different from traditional Mongolian yurts in other aspects. They are hardly portable, use lots of synthetics, and has the feeling of “manufactured” structures.

Below we compare Mongolian and Modern yurts in some important practical aspects.

Most modern yurts have two layers of cover: a) reflective barrier insulation, and b) polyvinyl cover for the roof and wall. These are both non-organic material and have relative hard surfaces.  Because of this, modern yurts are quite noisy, especially when they are used in areas with heavy rainfall.

“…Nothing prepared us for the sound of an afternoon deluge. It sounded like we’d parked the yurt under Niagara Falls. The torrent was so loud that if we were watching a movie, we’d have to turn it off. The volume didn’t go high enough to override the cascading rain…” (page 87, “A Year in a Yurt, by Adam & Autumn Raven).

On the contrary, Mongolian yurts have felt layer(s), waterproof canvass and exterior canvass, which are all natural soft material. Felt provide great insulation from only heat and cold, but also from noise, making Mongolian yurt far superior in this aspect.

“…We started looking around for wooded lots. Moving out of the sun and its potent summer heat, hot enough to melt candles in the yurt, was a priority…”. (page 168, “A Year in a Yurt, by Adam & Autumn Raven).

In contrast, wool felts in Mongolian yurts provide superior insulation when heat is transferred by conduction. The white color of the felt and the exterior cover help reduce heat transfer by thermal radiation. In order to increase insulation capacity for yurts to be used in very hot areas, we offer radiant barrier insulation in addition to the felt cover as an optional feature. With these two layers on, our Mongolian yurts have the best insulation capacity among its peers.

In most modern yurts, the stove has to be located in near the wall as they have openings for the stovepipe in the wall. This results in uneven heat distribution.

“…Having the wood stove over by the wall creates a hot side and a cold side of the yurt. It is harder to get the heat over to the cold side… I would rather have stove centrally located so the heat spreads evenly from the center to the walls…“, (page 63, Practical Yurts, by Steven W. Hatch).

In Mongolian yurts, the wood burning stove is located in the right middle of the yurt, and the stovepipe goes through the crown (skylight) so that the heat is evenly distributed in the yurt. 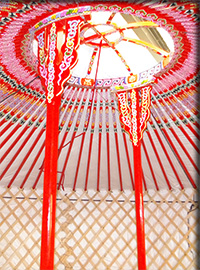 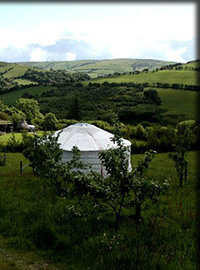 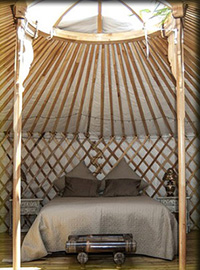